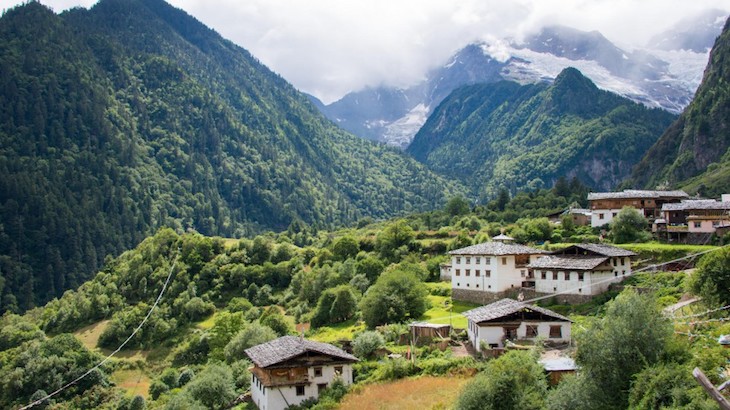 The first time I tasted the 2014 Ao Yun red wine blind, it was at a small dinner where it was served among many impressive wines – 1986 Chateau Clerc Milon, 2008 Giacomo Conterno Barolo Cascina Francia, 2014 Sena and 2007 Domaine Leroy Clos de Vougeot.

Ao Yun was comfortable in this company and the only unusual debate was that the dozen people around the table were torn about its origins. The other wines from France and Chile were fairly easy to identify blind and there was not much disagreement, but Ao Yun was the source of some debate around its origins. Some thought southern France, others were in Italy and there was one whisper of China in a half-joking manner, but none proclaimed it out loud.

I was among the confused – it was too earthy to be Chilean or Argentinian, not ripe enough to be from Stellenbosch, Napa or South Australia. It did not taste like a Bordeaux or southern French red blend, nor did it taste like Tempranillo, Nebbiolo or Sangiovese. We were stumped.

When the identity of Ao Yun was revealed, it was an eye-opener for everyone around the table, including experienced wine lovers and professionals. For most, it was their first taste of Ao Yun. I was familiar with the 2013 Ao Yun and was duly impressed by it when I tasted the wine upon its release with the then president of Moet & Hennessey Wine Estates, Jean-Guillaume Prats. I enjoyed the 2013 a few times afterwards and was convinced it was one of the best Chinese wines I have tasted. But the 2014 Ao Yun is at a different level – there’s greater intensity, depth and balance.

The 2014 is only Ao Yun’s second vintage. The name means “flying or roaming above the clouds”. The vineyards are located just below the Meili mountain in the northwest corner of Yunnan province, 6,740 meters above sea level. Visitors must brave a half-day drive up dangerous mountainside roads. The cabernet sauvignon (90%) and the cabernet franc (10%), which make up the final blend of Ao Yun was sourced from local farmers from four different villages: Adong, Shuori, Sinong, and Xidang – all four villages lie above 2,200 meters above sea level.

Even the region’s name, Shangri-la, evokes images of a lost paradise. The vineyards are nestled deep in the mountains, protected from the monsoons by two rivers: Yangsee and Salouen rivers. Thus, the wet growing season which plagues the eastern coast of China is not a worry in this high altitude terrain. Unlike the Yantai or Penglai district of Shandong province, home to Domaines Barons de Rothschild’s (Lafite) Chinese venture, Shangri-la enjoys a relatively dry growing season and good sunlight from its high altitude position. The area differs from the western regions of China, such as Ningxia, Xinjiang or Gansu, where Chinese viticulture is expanding most rapidly. The winters are not so cold that there is a need to bury the vines to protect them from the freezing temperatures. The biggest drawback to the region is the lack of infrastructure, such as reliable electricity, paved roads, nearby airports or public transportation.

The 2014 Ao Yun is surprisingly dense, riper and more powerful than the 2013. It is also deeper, more complex and offers layers of spices like cinnamon and nutmeg which gives way to dried Chinese red dates and persimmons. The finish is the most impressive aspect of the wine – it is not just an intense, full-bodied red wine; there is an earthy, almost graphite-slatey flavor with a firm tannin structure that carries the dark fruit and spices to a lingering finish. I love that the wine displays intense, wonderful concentration without any fat or richness. It gallops across the palate like a thoroughbred racehorse. That’s why in the blind tasting, it didn’t seem like a warm climate wine – it was definitely not Californian nor was it South Australian.

I was lucky enough to have Ao Yun 2014 just last month again, in January 2018, at another small wine gathering and again, it was served to me blind. This time, it was not decanted for six hours as it was the first time I tasted it, it was poured directly from the bottle. Tasting it the second time blind, the wine was much more youthful. I thought it was better with several hours of decanting which allowed the wine to shed some of its youthful vigor and its tightly-wound tannins. But there was no denying the wine’s identity and its origins. Finally, I thought to myself, we have a Chinese wine that expresses its unique origins and is distinctly different from other high-quality Cabernet Sauvignon blends in the world. Thanks to the owners behind the wine, the Moet and Hennessy group, the wine will have a worldwide distribution and be recognized for what it is. The main drawback is its hefty price tag, US$300 per bottle in most markets. But for anyone curious about the best wine from China producing just 2,000 cases for the world, it is worth seeking out.