Copyright © 2020
Jeannie Cho Lee,
All rights reserved
How To Join The Most Exclusive Wine Club In The World
11 July 2016
Author: Jeannie Cho Lee 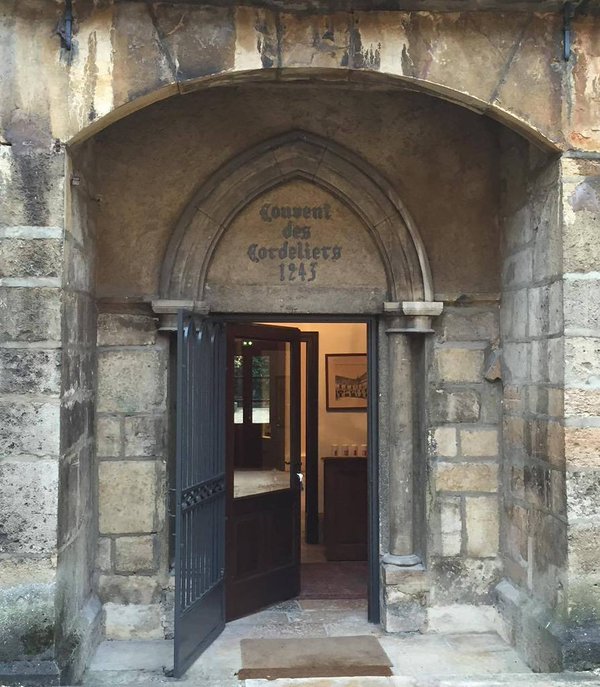 “It was just a crazy idea,” said Bernard Hervet, the visionary who brought 1243 Bourgogne Society to life two years ago. “I used to pass by this area of the Hospice de Beaune, which was a wine shop for a long time, and dreamt about turning it into a private club.” Hervet was enchanted with this older wing built in 1243, 200 years before the Hospice. It is tucked away and very private, despite being located on Rue de l’Hotel Dieu, just a stone’s throw away from the entrance to the historic Hospice de Beaune museum in Burgundy.

The enclave of interconnected stone rooms that house 1243 Bourgogne Society blends right into the gothic 15th century architecture of Hospice de Beaune, a former hospital that is now one of the most popular museums in Beaune. Throw in some fascinating history, a beautiful courtyard, multiple private rooms and an underground cellar perfect for storing wine and the foundations of a unique wine club is laid out.

“We currently have 60 members,” says Hervet. “Our maximum will be 100, no more, otherwise it is no longer special. I expect we will be full by next year.” Members hail from around the world including Australia, Switzerland, Hong Kong, Belgium and London. All are mad about Burgundy and many are serious Burgundy collectors though a handful of corporate memberships are also available. Hervet adds, “The purpose of this society is not to make business, it is about sharing wine with other like-minded, passionate wine lovers. We make this very clear from the beginning to all our members.”

For a society with only 60 members, of which less than seven are French, there are an incredible number of events, dinners and masterclasses held nearly every month at its premise. Some months like June during Musique et Vin, the music and wine festival launched by Bernard Hervet, there are almost daily events for members only. When I ask what type of events the society organizes, Herver replies, “For example, we offer masterclasses with verticals of very special grand cru wines led by the vignerons, or dinners with a theme, like vintages ending with the number ‘6’. Many people fly in just to attend the events.”

Hervet, who was in charge of Bouchard Père et Fils and William Fèvre for many years and currently consults to Faiveley, has contacts around the world. It was easy for him to reach out to his top clientele who have over the years become friends to inform them of this new venture, and many were supportive. “Where else in the world can you have this historic atmosphere and open all the bottles you want with complete freedom? You can choose to have a catered evening with the option of ten different chefs and all different types of food. 1243 is bespoke – each member and each event is tailored for each occasion.”

Why would someone who doesn’t physically live in Beaune join this society, I ask Hervet. “Because it gives visitors a place they can call their own,” Hervet replies. “Part of the membership includes free storage at the club’s cellar of up to 100 bottles. You can use the lounge and multiple function rooms for private parties or entertainment. You can book the small private rooms for four to six people, or invite 100 people for a larger wine tasting party – it is as you want. You can enjoy a facility with 800 years of history. You can meet like-minded people who love to open and share great Burgundy wine in a very unique place in the heart of Beaune. This is special.” Hervet seems unfazed that many of his French colleagues were doubtful about the success of the project. He laughs and says, “That’s just the French being French.”

So how does one become a member? First, you are introduced by a top or known personality and then your application is supported by two ‘godfathers’ or ‘godmothers’, who are already members of the club. There are now three female members, or ‘godmothers’, of the club. A discrete check is done to see if other members have objections or comments about the applicant. Once the application is approved, then one pays the membership dues, which does not cover the cost of attending any of the events organized by the club. Each event is charged separately.

When I ask Hervet how much the membership fee and annual dues are, he smiles and shakes his head, “I’m sorry I cannot share that information.” He looks at me curiously as though I have misplaced my sensibilities. The message is very clear: if you need to ask how much it costs, you clearly cannot afford to join.