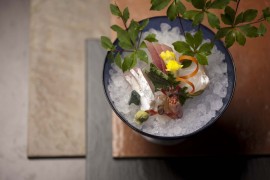 Finding the right wine to pair with raw fish depends not only on the type of fish but also its accompaniments – the amount of wasabi, soy sauce and ginger, and the extent of seasoning in the rice. For a mixed platter of sashimi and sushi, try a crisp, minerally non-vintage Champagne such as Krug, as it is one of the most versatile wines; it can cut through oily fish and bring out the flavor of ame ebi (sweet shrimp) and delicate white fish. Non-vintage Krug does a great job of retaining its own flavor and character while also allowing nuances and texture in the fish to be expressed. For stronger tasting fish such as mackerel, Champagne is a great palate-cleanser, and it doesn’t lose its essence and flavor when encountering wasabi and soy sauce. A tip here: opt for sea salt instead of a soy-sauce dip – both the fish and wine flavors are lifted.