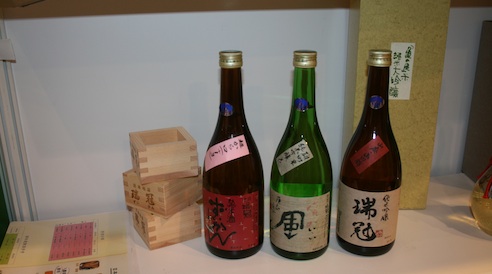 When I stand in front of the sake section at Citysuper in Hong Kong, I know what it must feel like for a wine novice to stand in front of rows and rows of wine bottles. Even if I were able to read kanji and kana, trying to remember names like Kinkan Kuromatsu Kintaikyo tokubetsu honjozo or Manzairaku Kaga no Kakusan daiginjo koshu makes German wine names seem less challenging. Just like with wine, the sake label must be deciphered: Kinkan Kuromatsu is the producer or brand name, Kintaikyo is the sub brand while tokubetsu means special and honjozo is the type of sake. Honjozo is a sake style where a small amount of alcohol has been added; its opposite would be junmai, which indicates no alcohol was added. Honjozo requires that the rice has been polished so that no more than 70% of the original size of the rice grain remains. Similarly, Manzairaku is the producer’s name while Kaga no Kakusan is the brand name. Daiginjo koshu means that the rice has been well polished down to at least 50% of its original size (daiginjo), and it is an aged sake (koshu). Daiginjo and ginjo indicate the polishing requirement amount with the former being 50% and latter being 60%. However, top daiginjo can use rice that has been polished to only 30% of its original size. The polishing step is important because the most refined delicate flavours of sake are found in the starchy centre of the rice. The outer layer of sake rice is predominantly fats, proteins and minerals, which can contribute to harsh or off flavours in the sake. Thus the most expensive sakes will often be highly polished so that only the heart of the rice is used. Figuring out the label is just the first step. As with wine, knowing that Gaja is the producer and that Sperss is the wine name doesn’t tell you that this wine is made from Nebbiolo grapes and that it is from the cool northeastern part of Italy. The label only says Langhe, Italy; so you need to figure out on a wine map that this is part of Piedmont and with further research you will find that Angelo Gaja, one of the top Piedmont producers, decided to opt out of the appellation/classification game and go his own way. He chose not to classify his wine under Barolo DOCG (Denominazione di Origine Controllata e Garantita), which is Italy’s highest wine quality classification to be free of its restrictions and enjoy greater winemaking freedom. Back to sake. In small print on the label, the nihonshu-do, or sake meter value, reveals the sake’s sweetness level, which can range from -5 (sweet) to +12 (very dry) with +3 to +5 being the norm. If only white wines had such standardized measurements for sweetness rankings, especially for Alsace wines, it would help us to figure out how sweet a wine will be! What I find most interesting in the sake label is the aminosan-do (amount of amino acids in the sake). This indicates the level of amino acids in the sake, which is basically the taste of umami, the fifth flavour discovered by a Japanese professor about a hundred years ago. The food industry has been aware, and has used this term for decades and it is finally making its way into wine vocabulary. I wonder what took so long. Umami taste is the detection of amino acids called glutamates in food and wine. In sake, higher levels of umami contribute to fullness in perception and a richness and tastiness in flavour. In food, umami can add a roundness, a savoury, meaty aspect that balances and marries together other flavours such as sweetness, sourness, bitterness, saltiness and spiciness. It is a naturally occurring flavour in foods like mushrooms, seaweed, tomato and double boiled soups. Artificial umami, monosodium glutamate, is extremely popular in fast foods where a dash of MSG can add a savoury, rich character to the food. As a flavour, umami is everywhere in the world of Asian cuisine – all the fermented soy bean seasonings like soy sauce, oyster sauce, miso, etc is brimming with umami. Japanese food is all about umami – I can’t think of very many dishes where soy sauce or soybean-based sauces do not play a role. It is no wonder then that sake is filled with umami and that it is measured as an ingredient in sake, Japan’s most traditional alcoholic beverage. I am fascinated by the world of sake. Partly because I adore Japanese food but partly because I am intrigued by how different the standards are for evaluating sake. All the flavours of sake, including the very important umami flavour, are subtle and quiet. To be powerful and strong in any of its elements is to be faulty or unbalanced. The quality of sake is more about balance, subtlety, lingering finish and harmony among its delicate flavours. The sake world is such a wonderful discovery that despite the challenges of having to learn an entirely new language, I feel it calling out to me just like wine did a few decades ago.