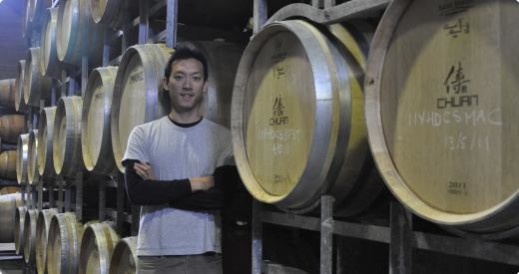 Han Tao Lau, an Chinese winemaker based in Australia, was born in Hong Kong to parents who are wine lovers. However, they were not the ones who inspired him to become a winemaker. After graudating from King’s College in London with a BSc in Human Biology, Han Tao spent a year traveling around the world. During this time, he met some friends from the wine industry whom he refers to as ‘wine geeks’, and these friends were ones who influenced him to pursue a career in winemaking.

Han Tao completed the Graduate Diploma in Oenology program at University of Adelaide and is currently the winemaker of Long Gully Estates in Yarra Valley where he also produces his own label wines called Chuan. He recently chatted with Asian Palate and shared his stories and thoughts about the process of becoming a winemaker.

AP: Winemaking is traditionally a Westerner’s endeavor. Recently, there have been improvements in opportunities for Asians, especially with new wineries emerging in China. Do you think it is still a challenge being an Asian winemaker? Are there some advantages too?

HT: To be honest, I don’t think it was ever a challenge for me being an Asian winemaker. I’m quite lucky in that I started and have based my career in Australia. I think compared to a lot of other countries in the world, Australia has a very liberal and open-minded winemaking approach, and this crosses over too in terms of job opportunities. It seems that as long as you have a decent palate, are willing to work hard and go the extra mile – VERY highly valued in Australia – and have your “head on straight”, then you can work here as a winemaker without any problems.

I definitely do see some advantages in my background. Having grown up in Hong Kong, I was exposed to a lot of international wines quite early, so I think it has broadened my palate and appreciation of wines. I also think that having been exposed to different flavours from a young age also help in my tasting skills. And of course, it also helps when Cantonese and Mandarin speakers come and visit where I work.

AP: Do you think wine critics, consumers or even other winemakers are bias on the wines you produce knowing about your ethnic background?

HT: In terms of winemakers, I don’t feel there’s any bias against me at all. I participate in both formal and informal winemaking workshops in the Yarra Valley in my capacity as the winemaker for Long Gully Estate, and interact socially with other winemakers as well – after more than 8 years in the Yarra, I’d like to think I belong there by now! I don’t seem to have any problems getting judging positions in wineshows and other judges are always patient and listen to my opinions. In terms of my own brand Chuan, sometimes, I have to admit that I wonder if there is some sort of a stigma attached with it being such an overtly Chinese type of branding. The wines that I make are a natural extension of my personality, experience, and background, so I’m just trying to have my label be as true as possible and to reflect the contents of the bottle. But I do feel that with a lot of wineries in China have a perception that having a European winemaker as the “face” of their brand is a much more valuable marketing commodity than a Chinese one though. Hopefully, this will change one day when Chinese winemakers can be respected as much as winemakers from other countries.

AP: Do you notice any differences between the palates of Westerners and Asians? When you produce your wines, do you have specific markets in mind that you want to target to?

HT: I definitely do see an innate difference between a Western and Asian palate, but remember, palates can be trained and moulded with repeated exposure to certain tastes and flavours. I think most Chinese tend to avoid more acidic and astringent flavours when they first start drinking wines. Westerners tend to enjoy quite acidic flavours right from the start. But then, even “Western” palates have their own differences – for example, when it comes to Chardonnay, continental European palates seem to prefer bigger, richer, oakier styles, while Australian palates seem to prefer leaner, tighter, more acidic styles.

AP: Was it difficult to get your first job at a winery? Please share the experience.

HT: My first winery job was as a vintage cellarhand at Paracombe Wines in the Adelaide Hills. I was studying wine marketing at the time, so I was pretty clueless – didn’t know how to connect a hose to a pump, had no idea how to sample grapes, etc. Again, it was easier for me to find work in Australia than in France. In those days, job applications in France still had to be written by hand. Even though I was already fluent in French, graduated from my winemaking degree, had a couple of vintages under my belt, and had my French partner to help me, out of the 30 chateaux that I wrote to in Bordeaux, only two of them bothered to reply – one said they were worried about what their neighbours might say if they hired me, and the other was Jean-Luc Thunevin from Chateau Valandraud, who luckily offered me a job for a vintage. Again, I think it was because he was considered an outsider in Bordeaux, so he always had more of an open mind. He was also very forward thinking and wanted me to help with a winemaking joint venture he had in China.

AP: What advice would you give people who are considering entering this occupation?

HT: I’d say before deciding whether to go off and study winemaking, definitely do a vintage somewhere first, meaning work a harvest to experience the joy of starting out at the bottom as a “cellar rat”, with long hours of cleaning, sweating, wet feet, and back-breaking manual labour. It really is a lot of hard work, but there is a method to the madness. If you can appreciate and enjoy the menial tasks and see the value in it all, then I’d say it is a career worth pursuing. Where I work normally, Long Gully Estate in the Yarra Valley, I definitely have to be aware of certain flavour profiles being more suitable at some price points, but I certainly don’t set out to make wines for different ethnicities. It’s a cliche, but I just try and be as true as possible to site where the grapes come from, and make wines that I myself would like to drink.