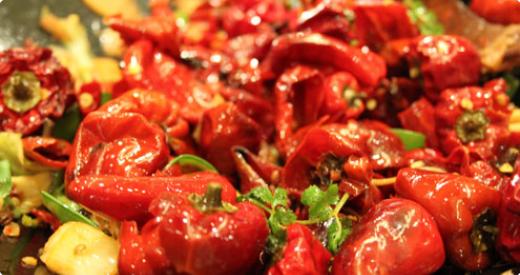 “Guizhou people like spiciness, Sichuan people don’t fear spiciness, Hunan people fear there’s no spiciness”. This Chinese saying covers all three of China’s best known spice-loving provinces. Sichuan, arguably China’s most famous province for spicy food, is noted for their “numbing spice” (麻辣)- a spiciness that both numbs and ignites fires on the tongue at once. The people of Hunan, on the other hand, are known for their love of fresh chillis, cooked in a “dry hot” (干辣) style, which is noted for its extreme spice and liberal use of oil in cooking. Guizhou sour-spicy (酸辣) broths give the province’s cuisine its unique character. Together, the provinces represent the major types of chili spices in Chinese cuisine.

The differences arise from the different kinds of chillis used and the differing cooking techniques to bring out the spiciness. Sichuan cuisine is famous for its unique flavour imparted by its locally grown peppercorn, or hua jiao . With citrusy, medicinal overtones, it produces the tongue numbing, tingling sensation. Other spices to increase the effect are also used, such as star anise and ginger in large quantities. Chillis were not brought into Sichuan until the 17th century by merchants travelling the Silk Road, but a wide variety of chillis decorate the dishes, from plump chao tian jiao , or “Facing-Heaven” chillies, to er jin tiao , the longer thinner chillies.

In Sichuan, they are generally found combined with other ingredients and in a variety of forms- from pastes in dou ban jiang or chilli bean paste, to flavoured oil in Sichuan pepper oil (花椒油), rather than alone, which tempers the heat. This makes Sichuan cooking more focused on the balance of flavours and fragrance of the different assortment of spices, and not in the level of spiciness. Signature dishes such as mapo tofu use several of these products; the dou ban jian is first sizzled in oil on high heat, before minced pork, garlic and scallions are then tossed in, fried with chilli oil and flakes, before finally being joined by tender chunks of tofu.

Hunan is known for the sheer quantity of different chillis in the over thousands of local dishes the province boasts of being able to offer. Chairman Mao is alleged to have joked that the more chillis one eats, the more revolutionary one becomes- fitting for the Hunan local and founder of the Communist government of the People’s Republic of China. Its capital, Changsha, is representative of Xiangjiang River cuisine, famous for its high chilli content, fresh ingredients and liberal use of oil.  Whole peppers pickled in salt, or duo la jiao , coarsely chopped, are a common component of a dish and eaten, rather than merely used in cooking to flavour it. Even in simple dishes such as Dong’an chicken, in which chicken thighs are marinated in soya sauce and salt, then lightly boiled, these chillis are found liberally chopped and stir-fried together with chilli flakes, peppercorns and ginger. In fact, it would be difficult to find a dish without these chilli garnishes. Another special aspect of Hunan spiciness is that it they are not often found in sauces and soups, but rather in garnishes or eaten whole.

Nicknamed Qian cuisine, the short form for the province of Guizhou, it is claimed to be extremely addictive, local saying stating “without eating a sour dish for three days, people will stagger with weak legs”. Guizhou cuisine similar to Sichuan cuisine in that the level of spiciness is not the main focus, but rather in the balance of flavours- in this case, the balance of sourness and spiciness. The popular iconic local pickled vegetable, yan cai (腌菜), often cooked together or added into dishes. For example, a staple dish of the province, Huaxi beef rice noodles- handmade rice noodles with diced beef and coriander – is cooked together with hot peppers and yan cai , giving it its sour and spicy flavour. Another soup-based signature dish is hot and sour fish soup, which is made with freshwater fish boiled in a broth with tomatoes, red chilli peppers, chilli oil and garlic and eaten with yan cai . Although not always spicy, yan cai itself is an essential contributing ingredient to the Guizhou’s famous sour and spicy flavoured cuisine.

The differences between Sichuan, Hunan and Guizhou cuisine is not simply in the levels of spice, but in the flavours and forms that the chillis are consumed. Between Sichuan chilli bean paste, Hunan pickled whole chilli and Guizhou’s combination of pickled vegetable and chillis, these provinces offer their own different approaches to “spiciness”. Although one could walk into a hot pot restaurant in each province, it would never be the same experience.