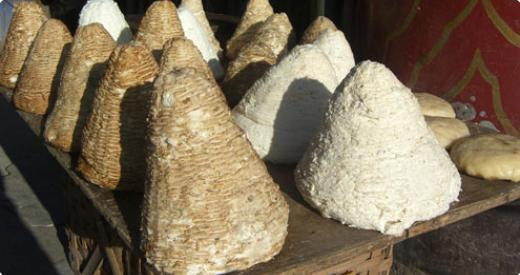 Yunnan stands out in being one of the provinces in China that holds the most number of different ethnic minorities. Nearly half of the country’s total 56 ethnic groups can be found here. The mélange of languages, cultures and religious beliefs all influence Yunnan’s dining culture.

A unique aspect of the Yunnan diet is the inclusion of dairy products . Chinese food is well-known for not having dairy even in their desserts. For example, there is no dairy used in classic Chinese desserts like tang yuan (sweet glutinous rice balls stuffed with a sweet filling of black sesame paste or lotus seed paste), chrysanthemum tea and wolfberry jelly and fresh mango pudding.

However, Yunnan cuisine stands out in its famous production of ru bing or “milk cakes”; in Western terms, it would be classified as “cheese”. They are traditionally made by the locals who settled in Lunan, 70km southeast of Kunming in the province of Yunnan. Made from straining and boiling fresh goat’s milk, it is then stirred together with vinegar to separate them into curds and poured into a wet cheesecloth with a heavy stone over it to settle overnight. These cheeses are now popular and sold in a variety of forms all over Yunnan. One type is ru shan , or “milk fans”; the milk curds are stretched into sheets that are wrapped around sticks and left to dry. Warmed on a grill, spread with rose petal jam and wrapped around a stick, they are sold and eaten as a popular snack. Another Yunnan use of the cheese is to include them into common family dishes such as  stir-fried cubes of cheese with broad beans.

The love of dairy products in Yunnan could perhaps be attributed to the large number of ethnic groups such as Mongolians and Tibetans. Although cows and goats are also raised in other parts of China, cheese or other dairy products do not exist. One likely reason for this is the popularity of soybeans and tofu. Soybean-based desserts have replaced the need for cow or goat’s milk and cheese. In modern times, milk is more commonly found in the daily diet, even if it is just to add to tea or coffee.

Mongolian nomads are famous for having developed a unique number of dairy products called tsagaan idee , or “white food”. These include different types of yoghurt, cottage cheese, dried curds and fermented mare’s milk. Although tsagaan idee are generally eaten from late spring onwards to cleanse the stomach of a meat-heavy diet during the winter, they turn them into products that would keep to be consumed during the winter, such as cheese. Milk tea is also an intrinsic part of Mongolian culture; tea leaves are mixed with boiling salted water as well as milk one-third of the amount of water, then repeatedly ladled until bubbles appear. Rice, flour, clotted cream and even pieces of meat are added to it to give it more substance.

The Tibetan daily diet is also notable for its inclusion of butter, cheese, sour cream and fresh milk generally from yaks.  However, Tibetan cheeses are very different; one kind is made from dara , or buttermilk, boiled, then cooled to separate into soft curds and squeezed into noodle-like shapes or melted with butter and sugar to dry into pretzel shapes. Hard, white and sweet, it is called chura kamp , literally “dried hard cheese”. The other type, chhurpi , is even harder, made from solidified yoghurt and then cut into 3cm squares to be chewed on for at least 2 hours as a travelling snack. Tibetan butter tea may be another historical factor in influencing other Yunnan locals to add milk to tea. Strong black tea, much like the indigenous local Yunnan black tea, is mixed with salt and freshly churned yak butter to produce the salty, creamy and pungent famous drink of Tibet.

Despite the popularity of cheese and milk in Yunnan, it still retains the stereotype of being foreign. Dishes like ru shan is similar to Cantonese 腐皮捲 or “tofu skin roll”- braised tofu skin rolled around a chopstick and then sliced into edible portions. Stir-frying the cubes of cheese into a family dish is also a distinctly Chinese style way of cooking. While some types of cheese has become incorporated into Yunnan cuisine, the way that it is often prepared and consumed remains Han Chinese.