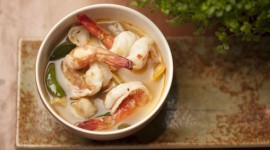 Thai cuisine is generally divided into four regions. First is the Central Plains, which includes Bangkok, a rich and fertile river delta known as the jasmine rice capital of the country. Jasmine rice, the fragrant long-grain variety indigenous to Thailand, is a staple that is typically served at every meal. Fresh seafood is also a prominent feature of the Central Plains’ dining table as most of the region borders the Gulf of Thailand. Eggs are also widely favoured and enjoyed in various ways including omelettes, fried and served on top of rice or within a stir-fried dish. Noodles are extremely popular and a flavourful rendition is ‘boat noodles’ made with rice noodles served in dark beef broth.

The second cuisine is Northern Thai which includes the largely mountainous region of Chiang Mai, and features bitter flavours and root vegetables such as acacia leaf and small eggplants. Sticky rice is often preferred over jasmine rice and flavours are generally robust. With a strong Burmese influence, many of the dishes use a greater quantity of onions, garlic and ginger compared to the south. Northern Thailand is famous for its wide variety of delicious spicy sausages.

The third type of Thai cuisine is Northeastern, also called Isaan. This is the least fertile and the poorest region of Thailand, which historically was more aligned with the Lao rather than the Thai kingdom. With strong Lao and Khmer influences, Isaan cuisine is heartier with more meat dishes. Grilling and roasting are common cooking techniques and the grilled meats are served with a variety of spicy and flavourful dips (naam jim).

Finally, Southern Thai cuisine, covering 14 provinces, is located along the peninsula that is shared with Malaysia. The diverse geography includes flat plains along both coasts, as well as rainforests. This region has abundant natural resources including rubber, tin and coconut. Various influences make its cuisine a hodgepodge of culinary delights combined with local ingredients like coconut. The large Chinese population has incorporated stir-fried dishes, barbecue pork and noodles as mainstays of the diet. In addition, the region blurs the culinary boundaries between Thailand and Malaysia. Fish curry, similar to the style enjoyed in Malaysia, can be found here as well as favourite Malay snacks such as fresh roti and fluffy wheat bread, often consumed with curries or stuffed with savoury or sweet fillings.

While every Asian country can lay claim to being the most food-obsessed, the Thais have incorporated their philosophy in their everyday language. Food is so important that common expressions use food analogies: mai kin sen literally means not eating noodles and is used when two people have fallen out; sen yai means big noodle and refers to a VIP or important person.

Food and eating are important parts of the Thai culture that have evolved over time to reflect the numerous influences from other countries: from China comes a fondness for noodles and quick stir-fry cooking methods; from India, a profusion of spices; from Cambodia and Burma, rich stews and from Portugal, the all-important chilli and other key food ingredients. With a strong love for food, Thais have embraced new ideas over the past several centuries and adopted the best parts into what evolved into Thai cuisine. Although the Thais have liberally borrowed from other food cultures through the centuries, its essence has not changed over the past century. It is a communal, rice-based experience with a focus on fresh, flavourful ingredients and harmony of intense flavours. A typical family meal will include soup, curry, vegetable, fish or seafood and sometimes a meat dish.

Three key components of Thai cuisine place it apart from other Asian cuisines: first, the generous use of fresh, raw vegetables and herbs, the most common of which include kaffir lime leaves, galangal, lemongrass, coriander and Thai basil. Second, the sheer intensity and sharpness of all the key flavours – sweet, sour, spicy and salty. Nearly all of these essences are incorporated into Thai dishes, whether it is a simple yam (salad), a stir-fried noodle or a curry dish. Third, despite the elevated intensity, each dish retains its own balance and harmony of flavours. Thai salads, for example, can bring together myriad characteristics including a tangy sweetness from unripe fruit, sour flavours from lime, salty tastes from fish sauce, citrusy herbal notes from lemongrass, coriander and mint and spiciness from red hot chillies.